Vatican accuses woman at heart of leaks trial of 'calumny' 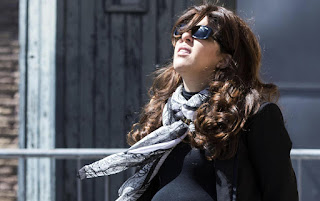 As the soap-opera of a Vatican trial against three former members of a papal commission and two journalists accused of leaking secret documents continues to unravel, the pope’s spokesman on Thursday said that statements made by one of the defendants during the trial may be “subject to legal action.” On Tuesday, Francesca Chaouqui, an Italian lay PR expert who worked at the Vatican on a now-defunct papal panel studying financial reform, and who is one of the five people being prosecuted, accused a high-ranking Vatican official of “waging a war against her” during testimony. Chaouqui, who’s almost nine months pregnant, amplified that charge on her Facebook page, where she wrote that Italian Archbishop Angelo Giovanni Becciu, the number two official at the Vatican’s Secretariat of State, has staked his credibility on her going to prison, so she’ll be “condemned without evidence.” She also wrote that she’s “not afraid of four feet of pure evil,” in reference to Becciu’s diminutive height, and that she stands by her accusations. Father Federico Lombardi, the Vatican’s spokesman, released a statement Thursday responding both to her sworn testimony and her subsequent Facebook post. “It has become necessary — without desiring in any way to condition the action of the Court — to deny, in a most absolute way, such accusations and to state that, since they are calumnious affirmations, they are absolutely unacceptable, and subject to legal action,” Lombardi said. In turn, Chaouqui, who’s already said she plans to publish a book about her experience, responded to the spokesman, saying that “the calumny and unacceptable thing is what the Vatican, in the figure of the substitute, is doing against me.” Becciu’s post is referred to as the “substitute” because he acts on behalf of the Cardinal Secretary of State, Italian Cardinal Pietro Parolin. In a Facebook post published on Thursday and addressed to Lombardi, Chaouqui writes that he knew about an alleged dossier with “lies” about her, and which apparently Becciu had received three years ago, when she was hired by the Vatican. She claims that the document, which among other things compiled a series of embarrassing Tweets by her against senior Vatican officials, was leaked to the press by Becciu, and that Lombardi too had received the dossier. Chaouqui also gives details about the night of her arrest almost nine months ago, after which she was released the next day. Among other things, the PR expert writes that during her interrogation Becciu would constantly call the two men questioning her, and that she knows this to be true because “we witches have a long eye.” “He [Becciu] was next to the phone, like a wolf that’s waiting to catch its next prey,” she wrote, adding that there’s no evidence to back the allegations against her. She closes the post writing that she awaits the sentence “serenely,” and challenging the Vatican to go through with it. “I will not yield,” she writes, adding that those accusing her now will have to face “divine” justice. Chaouqui and the other defendants are being tried under a reform to Vatican criminal law instituted by Pope Francis, which makes the offense of revealing confidential documents punishable with up to eight years in prison.
Posted by Mike at 6:40 PM