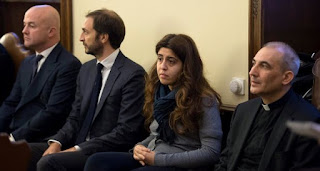 The more you attend the so-called Vatileaks 2 trial in the Vatican, the more it seems the whole thing has been dreamed up by a Dan Brown wannabe. For example, when Msgr Alfredo Abbondi, head of office in the Vatican’s prefecture for economic affairs, took to the witness stand for a three-hour long deposition last Saturday, he spoke of “secret services”, “electronic bugs”, “threatening letters” and “secret meetings”. He even told how a colleague had offered to “break a chair over my back”, while he said the atmosphere in his office was so bad he had asked to be transferred four times. Vatileaks 2 is the Vatican City State trial which opened last November and in which five people are accused of “illegally procuring” and “successively revealing” confidential Holy See documents. All those indicted – Spanish Msgr Lucio Angel Vallejo Balda, his Italian lay assistant Nicola Maio, lay consultant Francesca Chaouqui and journalists Gianluigi Nuzzi and Emiliano Fittipaldi – have been charged under section IX of the Vatican’s “Crimes against the Security of the State”. Financial reform The significance of Msgr Abbondi’s office is that for a period it housed the archives and meetings of the Cosea commission, a 2013-2014 group set up by Pope Francis to advise him on financial reform. Church investigating cardinal’s apartment renovation Two of the defendants, Chaouqui (33) and Balda (54), served on the commission and are accused of stealing and leaking documents to the media. These featured in best-selling books by Nuzzi and Fittipaldi, published in November. When Msgr Abbondi started to tell the hearing about electronic bugs and how Balda would take him out to the office terrace for fear of being bugged, judge Giuseppe Della Torre sat up in his chair and said: “What were you worrying about bugs for? Had you something terrible to hide? This is Mafia-style behaviour . . . ”. However, they were indeed worried about electronic bugs in that Vatican office. Msgr Abbondi said Chaouqui was so convinced they were being bugged that she turned up in the office one day with a “technician” to debug the place. While the technician was there, Chaouqui climbed up a ladder, poked around in an electrical junction box and then seemed to throw something out the window. Msgr Abbondi never knew what, if anything, she had thrown out the window, he said. Chaouqui, who was formerly employed in the Rome office of Ernst & Young, generated a lot of mystery about herself, Msgr Abbondi said. For example, she encouraged Balda to believe she worked for the Italian secret services, he said. Chaouqui is not the only mystery in this story. Vatican insiders recall how Balda had told people he would be ordained a bishop in January 2013. He even advised the Spanish ambassador to the Holy See to leave the date open so that he could attend. When the ordination did not happen, he said the then cardinal secretary of state, Tarcisio Bertone, had told him not to worry and that he would be made a bishop “when and where you want”. All of which, for those who know how the Holy See works, sounds like pure fantasy. Nor did Saturday’s main witness, Msgr Abbondi, manage to sound reassuring when he told the court he had been “cursed” because he had been mentioned in an earlier book written by Nuzzi. In case the Vatican press pool had missed the point, Msgr Abbondi appeared in the cloakroom at the end of the session telling us, yet again, that his career had been ruined. The implication of his words was that, one day, he would have a lot of stories to tell. Arguably, the biggest question posed by Vatileaks 2 concerns Pope Francis himself. What will he decide in relation to these strange goings-on, taking place just across the road from him in the Uffizi Giudiziari on Piazza Santa Marta? Vatileaks 1, the trial four years ago of Pope Benedict’s butler, Paolo Gabriele, accused of an almost identical crime, ended with a guilty verdict, an 18-month prison sentence and, two months later, a papal pardon. In this holy year of mercy, it would hardly be a surprise if Pope Francis followed his predecessor’s example.
Posted by Mike at 10:40 PM