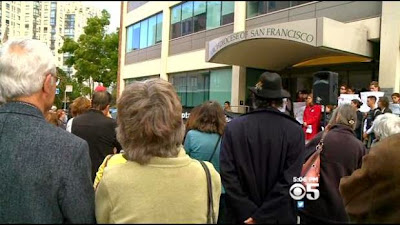 After months of heated debate, San Francisco Catholic school teachers said they are no closer to a contract deal with the archdiocese. Teachers from four high schools operated by the Archdiocese of San Francisco rallied Wednesday afternoon in front of the Chancery office, calling for a rejection of Archbishop Salvatore Cordileone’s latest revision of the teacher handbook. The proposed handbook requires strict adherence to the church’s teachings on things such as homosexuality and contraception, both in and out of the classroom. Protestors said the latest draft of the handbook is a little softer in tone, but the substance is the essentially the same. “So the good news here is that there have been some changes to this document, so it seems as if the archbishop is willing to listen, to a certain degree,” said teacher Sal Curcio. “We wish he would listen more, and we wish he would really communicate with us more.” Negotiations between the archdiocese and the union are ongoing. In a statement Wednesday the archdiocese said, “both sides are hopeful they are getting closer to resolving the few remaining bargaining issues on which there is disagreement.”
Posted by Mike at 6:50 AM