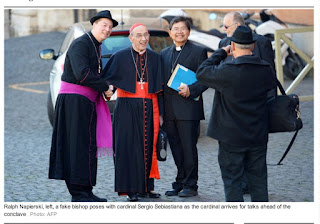 Ralph Napierski, a self-appointed bishop from an apparently fictional order called Corpus Dei, managed to get through a checkpoint manned by Swiss Guards but was stopped before entering the Paul VI Hall, where the cardinals were gathering. Dressed in fake bishop’s vestments, complete with a purple sash, Mr Napierski smiled to photographers as he mixed with more than 140 cardinals from around the world as they filed into the hall to discuss the challenges facing the Church and possible “papabili” or papal candidates. On closer inspection the sash turned out to be a scarf. Unlike the elderly cardinals, who wore their distinctive red skull caps, the impostor wore a black fedora-style hat with a rim. At one point he posed for photographs, shaking hands with Cardinal Sergio Sebiastiana, an Italian who is president emeritus of the Prefecture for Economic Affairs of the Holy See and a member of the Sovereign Hospitaller Order of the Knights of Malta, a charitable Catholic organisation. After being rumbled as a fake bishop, Mr Napierski was escorted away from the gathering by Swiss Guards. He said that he was a member of the “Italian Orthodox Church”, which does not exist, and said the Catholic Church had made grave errors by allowing priests accused of child abuse to move around different parishes. On his website, Mr Napierski claims that he is a founder of the Corpus Dei Catholic order and describes himself as “a slave and apostle like St. Paul”. The blog claims that “bishop” Napierski “comes out of a tribe of the Roman Catholic Church that is fighting the heresy and false movements inside the Roman Catholic Church.” He is a keen proponent of something called “Jesus Yoga” and claims to have invented “a system to enable persons to control computers with the power of thoughts”.
Posted by Mike at 7:02 PM