Ellen Teague Independent Catholic News March 27, 2013 The funeral of Franziska Jägerstätter was held last Saturday in the tiny village of St Radagund in Upper Austria where she had lived all her life. Cardinal Christoph Schönborn and several bishops officiated at a two-hour Mass, held outdoors because the large congregation could not fit into the tiny church. According to reports, it was “very, very cold”. Whoever met Franziska Jägerstätter, "went away forever blessed " said Bishop Ludwig Schwarz of Linz the previous evening at a Requiem Mass in Linz Cathedral. The widow of Blessed Franz Jägerstätter, she died just two weeks after celebrating her 100th birthday. He recalled that Franziska’s life had for 70 years brought the message of Blessed Franz Jägerstätter to post war generations. He praised Franziska as devout woman "who set an example for all of us as followers of Christ", saying “whoever met her went away forever blessed". Members of the Jägerstätter family and the parish of St Radegund and faithful from all parts of the Diocese of Linz came to the Mass. From the political world, Governor Josef Pühringer attended. The sacristans of Upper Austria were well represented, as Franziska for 30 years held the office of sacristan in St Radegund, a role she took over from her husband in 1944. Franz was beheaded in on 9 August 1943 for refusing to fight in Hitler’s army. He was beatified six years ago after a long campaign by Pax Christi and others to recognise his witness for peace. Jägerstätter’s correspondence with his wife during his incarceration in 1943 is a primary source for revealing how he came to his stance, and she supported his action. Valerie Flessati of Pax Christi UK reports that: “when we were in Linz Cathedral for his beatification in 2007 the entire congregation gave her a standing ovation in unspoken recognition of her own sanctity and much longer sacrifice”. She points out that things were really tough for Franziska and their three children after his execution and local people shunned her for years. “Meeting Franz Jägerstätter’s wife Franziska, as I did several times, was always so moving”, says Bruce Kent; “a quiet woman with the twinkle in her eye, I could not fail to think each time of the terrible pain of that separation and execution in 1943”. He added that, “hers was a long life of great faith matched with equal hope” and “to me and many she is as much Blessed as her martyr husband”. Pax Christi organises an annual service on 9 August in the crypt of Westminster Cathedral to give thanks for the life and witness of Blessed Franz Jägerstätter. More photos of the funeral at St Radegund can be seen at: https://www.dropbox.com/sh/894jqvo2wyw69lp/ax77vRsTvn and from the Community of Sant'Egidio 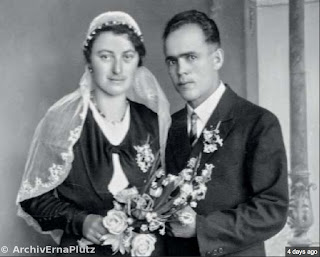 .....Franz, who was beheaded in Berlin 70 years ago, in 1943, and was beatified by Pope Benedict XVI in 2007, had found in the simple and firm faith of his wife Franziska a strong support to his decision to resist and oppose. In a letter to the prison chaplain, who had assisted her husband to the end, Franziska writes: "I feel so much pain for him because I lost a good husband and a good father for my children. I can assure you that our marriage was one of the happiest of our parish community ... But the good God has willed otherwise and loose that bond so beautiful. I await with joy to see him again in heaven, where no war can no longer separate us" (from C. G. Zucconi, Christ or Hitler?, Cinisello Balsamo (Mi) 2008, p.208).
Posted by Mike at 9:52 PM