Kenneth R. Weiss and Sol Vanzi Los Angeles Times Dec. 29, 2012 MANILA — Philippines President Benigno Aquino III has signed legislation that will provide modern contraceptives to the nation’s poorest people and mandate sex education in public schools, a spokeswoman announced Saturday. Leaders of the Roman Catholic Church in the Philippines immediately vowed to challenge the new law in the nation’s Supreme Court and rally demonstrations in the streets, alluding to the bishops’ role in inspiring the “People Power” revolution in 1986 that helped topple former President Ferdinand Marcos. “The fight is far from over,” said Archbishop Ramon Arguelles, a vice chairman of Catholic Bishops’ Conference of the Philippines, in a radio interview Saturday. “The church will continue to protect and defend life. The church will not stop.” The Responsible Parenthood and Reproductive Health Act was passed by the Philippines Congress this month after the bishops and their supporters had successfully blocked it for 14 years. 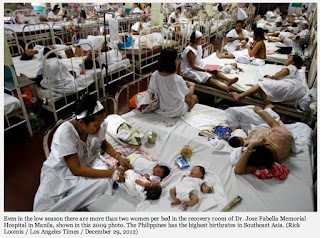 Access to birth control is a particularly acrimonious issue in the Philippines, which has the highest birthrates in Southeast Asia and millions of impoverished parents struggling to feed their large families. Half of all pregnancies are unintended and access to modern contraception is mostly limited to those who can afford it. The bishops, who hold large sway in a nation that’s more than 80% Catholic, oppose birth control pills, condoms, IUDs and other forms of modern contraception, equating them with abortion or suggesting that they promote promiscuity. Instead, they sanction only Vatican-approved “natural” family planning, such as withdrawal or abstinence during a woman’s fertile periods. Yet the people in the Philippines have been edging away from the Catholic hierarchy on such personal matters, following the path of Catholics in Europe and the Americas. For the last decade, polls have shown that 70% of Filipinos support the reproductive health bill that will take effect in January. .......... Government surveys show that 39% of married women in the Philippines want to postpone pregnancy or have no more children, but are not using modern contraception. Similar patterns exist across the developing world, where an estimated 222 million women want to avoid pregnancy but do not have access to effective contraceptives. If they did, unplanned births would fall by two-thirds, as would the number of abortions, according to the U.N. Population Fund and the Guttmacher Institute, a New York think tank that supports universal access to contraceptives and safe abortion. ............ Full article at the Los Angeles Times
Posted by Mike at 4:03 PM