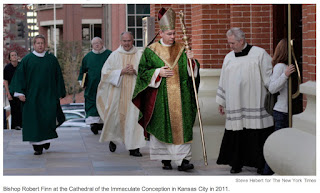 KANSAS CITY, Mo. — In the three months since Bishop Robert W. Finn became the first American prelate convicted of failing to report a pedophile priest, lay people and victims’ advocates have repeatedly called for his resignation. Now, recent interviews and a private survey by a company working for the Roman Catholic diocese here show for the first time that a significant number of the bishop’s own priests have lost confidence in him. Bishop Finn, who oversees the Diocese of Kansas City-St. Joseph, is serving two years of court-supervised probation after his conviction in September on a single misdemeanor count. The survey by Church Development, a consulting firm the diocese hired to run a capital campaign, was of 40 priests. In the 32 responses obtained by The New York Times, half of them seriously doubted whether the bishop should continue as their leader, and several suggested that he resign. “I think it would be easier for us to move forward without Bishop Finn as our bishop,” the Rev. Michael Clary, the pastor at Holy Spirit Catholic Church in Lee’s Summit, Mo., which is part of Bishop Finn’s diocese, said in an interview. He added, however, that the bishop’s resignation may not be the only way forward. Such sentiments raise the question of whether Bishop Finn can successfully continue to oversee a diocese of 87 parishes and more than 130,000 people, or whether he will go the way of Cardinal Bernard F. Law, who gave up his post in Boston a decade ago after an outcry over his practice of reassigning priests accused of abuse to new parishes. A national online petition calling for Bishop Finn’s resignation has collected nearly 110,000 signatures. But the bishop also has a strong base of supporters who contend that the critical priests do not appreciate Bishop Finn’s doctrinally conservative approach. He belongs to Opus Dei, a conservative Roman Catholic organization. “Yes, there is a divide in the presbyterate, but in my opinion it’s the same old tired divide that has existed from the day he arrived,” the Rev. Vince Rogers, the pastor at St. Andrew the Apostle in Gladstone, Mo., and a 20-year veteran of the diocese, wrote in an e-mail. “In a word, some of the priests wish that we had a more liberal bishop, and they are willing to use any means to achieve that end.” Bishop Finn’s conviction stemmed from his failure to report the Rev. Shawn Ratigan to the authorities after hundreds of pornographic pictures that Father Ratigan had taken of young girls were discovered on his laptop in December 2010. ........... Critics are troubled by the silence of church leaders in the United States and Rome. Bishop Finn attended the most recent meeting of the American bishops, in Baltimore in November — the first since his conviction — but no bishop addressed the matter publicly. Asked to comment on Friday on Bishop Finn’s situation, the chairman of the bishops’ child protection committee, Bishop R. Daniel Conlon, of Joliet, Ill., declined. Only the pope can remove a bishop from office. Several priests in Kansas City have written to Pope Benedict XVI’s representative in the United States, Archbishop Carlo Maria Viganò, calling for Bishop Finn to resign. The archbishop did not respond to an e-mail requesting his comments. Regardless of where the diocese’s priests stand on the bishop, most find themselves stuck between a bishop they want to see succeed and angry parishioners. ............. Festering anger and mistrust throughout the diocese present huge challenges in persuading parishioners to open their wallets. Priests critical of Bishop Finn said that for that to happen, he needed to admit wrongdoing and ask for forgiveness. “Some say he has made that apology, he has said he’s sorry, but he hasn’t told us what he’s sorry for,” said the Rev. Matthew Brumleve, pastor at Holy Family in Kansas City and another 20-year veteran of the diocese. “Is he sorry he got caught? Is he sorry we don’t see things the way he sees them? Or is he truly sorry for letting down the children of this diocese?” ........... During the priests’ annual retreat at a resort in the Lake of the Ozarks in November, one priest told an anecdote about when he had been caught speeding in Kansas. As the bishop stood before them in a windowless room, the priest explained that he had not realized he had been driving too fast until he had gotten pulled over and received a ticket. Even though he did not mean to break the law, he still did, the priest said, likening his situation to the bishop’s. But during the meeting, Bishop Finn denied that he had done anything wrong, according to two priests there. The bishop’s supporters raise their brows at the demands of their brother priests for further apologies. “I believe he’s accepted responsibility for what happened and he’s paying the price for it,” said the Rev. Angelo Bartulica of St. Columban in Chillicothe, Mo. “I don’t understand what more people want.” Full article at the New York Times
Posted by Mike at 6:53 PM