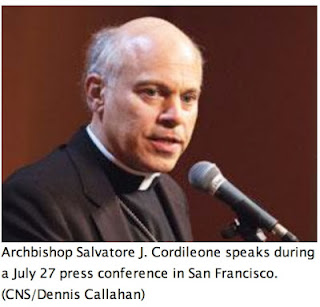 In an Oct. 21 announcement that apparently caught the San Francisco archdiocese and St. Patrick's Seminary and University off-guard, the U.S. province of the Society of the Priests of St. Sulpice informed the school's board of trustees that the order would be withdrawing its members from the school. "We have recently been informed that we are no longer invited to provide Sulpician administrative leadership to St. Patrick's. As a consequence, we will not be able to serve the seminary according to the Sulpician tradition. After consultation, discussion and prayerful discernment, the Provincial Council has decided to withdraw totally from St. Patrick's as of June 30, 2017," said a statement issued by the Sulpicians' U.S. provincial office in Baltimore. Known as Sulpicians, the community of priests helped found the seminary 118 years ago and has administered and helped staff it since then. An Oct. 22 archdiocesan press release thanked the Sulpicians "for their very long service to the archdiocese and to those other dioceses served by the seminary," but also added: "Before being informed of this decision, the Board of Trustees had intended to begin discussions that might lead to new Seminary administrative models with the Society. We regret that we did not have the opportunity to explore the possibility of forming a new collaborative model with the Sulpicians." The seminary trustees "also announced the formation of a search committee to assist Archbishop [Salvatore] Cordileone in filling the position of rector of the seminary and university," concluded the archdiocesan release. Sulpician Fr. Gladstone H. "Bud" Stevens has served as the school's president and rector since June 1, 2014. Mike Brown, director of archdiocesan communications, told NCR that the replacement search for Stevens was to be timed for the end of the school year when the Sulpicians withdraw, not for the near future. Stevens referred all media inquiries to the provincial's office. Sulpician Provincial Fr. John Kemper was said to be traveling and had not returned requests for comment before this report's posting. Brown also provided NCR with a copy of an Oct. 23 memo from Cordileone to priests of the archdiocese. In it, the archbishop said a conference call had taken place prior to the trustees' gathering "with members of the Executive Committee of the Board and Fr. Kemper, and a member of the Provincial Council, Fr. Dan Moore, in order to apprise them of some concerns that had come to the attention of some of the Board members and to inform them that at the upcoming Board meeting some ideas would be proposed and discussed as to how best to address these challenges, one of which was the possibility of seeking a new collaborative relationship with the Sulpicians." "The day before the Board meeting, however," continued the memo, "the Provincial Council for the United States met to deliberate on these issues, and reached their decision to withdraw entirely from the seminary." Asked what sort of administrative collaboration might have been considered or suggested, Brown emailed, "That was all to have been further discussed at the Board meeting." Tension between the Sulpicians and the archdiocese over administration of St. Patrick's is not new. In September 2013, Cordileone, then-San Jose Auxiliary Bishop Thomas Daly and then archdiocesan vicar for administration Fr. James Tarantino met with then president-rector Sulpician Fr. James McKearney, leaving McKearney no option but to resign, according to the Sulpician. [ To understand this development in context, read the earlier story on the forced resignation of Fr. James McKearney several years ago]
Posted by Mike at 5:24 PM