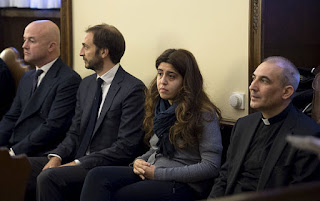 Pope Francis invoked the memory of the notorious Borgia family as he returned from his African trip to a Vatican that is mired in scandalous allegations of espionage, sex and corruption. A Spanish priest who is one of five people on trial in a Vatican court, charged with leaking confidential Holy See documents, has claimed that he had a sexual relationship with one of the other defendants – a married public relations executive named Francesca Immacolata Chaouqui. Monsignor Lucio Vallejo Balda said in a statement that he broke his vows of celibacy and had sexual relations with Mrs Chaouqui on at least one occasion. They both sat on a commission, set up by Pope Francis, to reform the Holy See’s murky finances. The trial, which is proving embarrassing for the Vatican, began last week and will resume on Monday. The Pope was asked about the leaks scandal by Vatican correspondents as he returned from his six-day visit to Kenya, Uganda and the Central African Republic aboard the papal plane. “I just thank God that there’s no Lucrezia Borgia,” he joked, referring to the illegitimate daughter of Pope Alexander VI, a femme fatale of the 15th century who has long been associated with allegations of incest, poisoning and murder. The Jesuit pontiff admitted that it had been an “error” for him to appoint Mrs Chaouqui and Msgr Vallejo Balda to the finance commission that he set up shortly after his election in 2013. He suggested that Mrs Chaouqui had been driven to allegedly leak the documents because of her anger at not being retained by the Vatican once the commission’s work was done. “Some say she was upset about this, but the judges will tell us the truth about the intentions (of the whistleblowers), how they did it,” he said. The Pope vowed to continue with the reforms he has embarked onto streamline the Holy See’s bank and to clean out corruption and nepotism within the Vatican’s governing body, the Curia. He said he had not “lost any sleep” over the scandals because they showed that corruption was being rooted out and his reforms were working. Msgr Vallejo Balda, 54, made the claims about sleeping with the public relations consultant in statement to his lawyers, which was obtained by La Repubblica, an Italy daily paper. He claimed they had sex in Florence in December last year. “I’m ashamed of what I did with Francesca,” he wrote in the statement. He said he believed Ms Chaouqui, 33, was working for the Italian secret services. “She told me that she was working for the intelligence services and that her marriage was just a cover. She sent me photos of Corrado (her husband) with another woman, who she said was his real wife.” Later their relationship turned acrimonious. “She wrote me a Whatsapp message telling me that I was an a**ehole. She was a bad person, she wrote to me calling me a worm.” Mrs Chaouqui denied having sex with the priest. She said she was prepared to sue him and his lawyer for defamation. “At the trial he better retract everything, otherwise I’ll leave him standing in his underpants. “I know emirs and billionaires – if I had wanted to betray my husband I certainly wouldn’t have done it with an old priest who doesn’t even like women,” she told La Repubblica. The pair are accused of passing confidential Vatican documents and computer passwords to Gianluigi Nuzzi and Emiliano Fittipaldi, two Italian journalists who last month published revealing books based on the papers, one called Avarice and the other Merchants in the Temple. If found guilty, the defendants face up to eight years in prison. Msgr Vallejo Balda has been held in a cell in the barracks of the Vatican gendarmerie since being arrested in early November. The trial threatens to overshadow a special Year of Mercy, convened by Pope Francis, which begins next Tuesday.
Posted by Mike at 4:47 PM