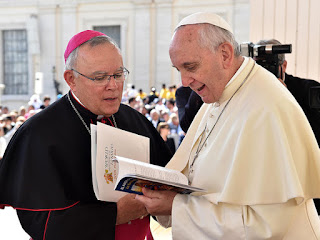 As I rounded Lombard Street the other day, heading west in Philadelphia, I was greeted by a life-sized, cardboard cutout of Pope Francis on a balcony at Second and Lombard Streets. His arms were outstretched and he was wearing a shirt with the word “Hope” on his chest. My first thought was: Does this poor soul know what he is in for in Philadelphia? As our pope continues to preach tolerance, forgiveness, and humility, the Catholic Church in Philadelphia escalates its ground war against such crazy notions. The local archbishop, Charles J. Chaput, rules with a fist clenched in a velvet glove. Cloaked as a man of God, his message is simple: Follow all rules or leave the Church; we have no need for dissent or diversity in our ranks. Judging from some of his email replies to the faithful, he is less than kind about delivering the message. Lately, he has taken off his gloves and started delivering bare-fisted body blows. Some days it seems he is auditioning to be a modern-day Rocky Balboa in clerical garb, pounding away on a side of beef at a slaughterhouse at the Italian Market. On Tuesday, Rocky Chaput pronounced that all parents of Catholic school students must sign a loyalty pledge, acknowledging allegiance to Church doctrine and to him as their supreme moral authority. Parents, who often work two jobs to afford a Catholic education for their children, are being lectured that Catholic education is a privilege, not a right. If they don’t agree with every Church doctrine, they should head for public school. His edict comes only a few years after he shuttered dozens of Catholic schools, often without consulting parents, and after Catholic bishops have been targeted for concealing sexual abuse of children by clergy. The edict follows on the heels of Rocky Chaput’s praise for the firing of Margie Winters, a devoted teacher at Waldron Mercy Academy. Her only crime was to love another woman. Is this a new pattern for the Catholic Church in the City of Brotherly Love? Purge the infidels? I hope not, but it’s a pattern that’s hard to ignore. So when Pope Hope arrives in a couple of weeks, I hope that he is able to reverse this trend. I hope that he can show that all Catholics are welcome in this Church, even those who seek discourse with Church leaders, have the courage to challenge authority, or simply want to be welcomed as children of God in our church pews. When our pope visits a local prison, I hope Rocky Chaput breaks from the fight and lets Pope Hope be greeted by the rank-and-file chaplains, those who minister to inmates daily under the most difficult conditions. The pope shouldn’t just have by his side Rocky Chaput, greeting inmates who he rarely, if ever, has offered ongoing spiritual counsel. I also pray that our pope will be greeted by Sr. Mary Scullion, a domestic Mother Teresa, who has ministered to the homeless for decades and built a dynamic organization that is gradually eliminating the vicious cycle of homelessness. All with little or no help from the archdiocese’s treasury. Yes, she has risen to the defense of the Waldron teacher fired at Rocky Chaput’s direction, or at least with his holy blessing. But, for years, she has practiced what Pope Hope, and Jesus Christ, preach about mercy, compassion, and reaching out to those less fortunate. Let Pope Hope see our best side, not just doctrinal purists who fit Rocky Chaput’s image of a good Catholic. And I hope that our pope sees and talks to local priests who may not always walk in lockstep with Rocky Chaput. At my parish, Annunciation B.V.M. in Havertown, the pastor blasts homosexuals and gay marriage from the pulpit, denounces the U.S. Supreme Court, and defiantly refuses to pour even a drop of water on the feet of women who devoutly worship in his congregation on a daily basis. All of this while our pope urges his priests to humble themselves, be less arrogant, and be like Christ. When confronted with such irony, our pastor proudly proclaimed from the pulpit that “just because the pope washes women’s feet, does not make it right.” No doubt my pastor will be distributing the Holy Eucharist on the Parkway after ignoring Pope Hope’s homily. This week, my granddaughter walked off to her first day of kindergarten — at a public school. She is the first in our family not to attend a Catholic school in generations. Although it was a bittersweet day for us, Rocky Chaput will no doubt rejoice in another infidel purged from the ranks. I hope my granddaughter prays, like many of us, that Pope Hope can bring some sanity to the madness in Philadelphia. Meanwhile, I will continue to worship every Sunday until the purge finally comes to my door. Until then, the pope is our only hope. Timothy R. Rice is a U.S. magistrate judge. The views expressed are his own.
Posted by Mike at 8:21 PM