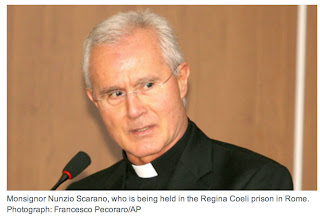 Even as he tours the favelas and beaches of Brazil, Pope Francis may find it difficult to forget what is going on back home. On Thursday, a prelate accused of attempting to smuggle €20m (£17m) into Italy from Switzerland appealed directly to the pontiff, insisting on his innocence and accusing his lay bosses in the Vatican's asset management arm of abusive activities which he said were covered up by some cardinals. In a letter written from the Regina Coeli (Queen of Heaven) prison in Rome, where he has been detained since his arrest with two others on 28 June, Monsignor Nunzio Scarano told Francis: "I have never laundered dirty money; I have never stolen. I tried to help someone who asked for help." In the missive, written last week and released by his lawyers, he added: "The documentation in my possession proves my honesty and my battles against the abuse of my secular superiors, protected by some senior cardinals." He also accused some of his superiors of blackmailing and manipulating the cardinals concerned, Reuters reported. Until recently Scarano – dubbed "Monsignor 500" by the Italian media for his taste in high-denomination euro notes – occupied a senior position in the Vatican's asset management arm, the Administration of the Patrimony of the Holy See. But he was suspended after being placed under investigation in a separate affair involving allegations of money laundering, which he also denies. On Friday, before setting off for Brazil, Francis announced he was setting up a commission to look into the reform of the Vatican's administrative and economic structure. But his spokesman, Federico Lombardi, told reporters Francis had not seen Scarano's letter before his departure. Lombardi announced on 12 July that two of Scarano's accounts at the scandal-plagued Vatican bank – the Institute for Religious Works, which Francis is also planning to reform – had been frozen.
Posted by Mike at 10:04 AM