"Cold war" between rebel priests and the vatican 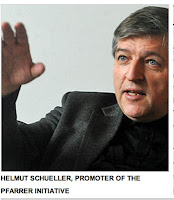 The decision to revoke Mgr. Helmut Schueller’s title comes just as the Austrian rebel priest movement prepares for a big international event This punishment, which is more symbolic that anything, is nevertheless the sign of a certain cooling towards the activity of Austria’s rebel priests, just as they prepare for a big international event in 2013, which is aimed at creating links between priests across the world who are becoming restless with the Vatican’s ultra-conservatism and are seeking deep reforms in the Catholic Church. Yesterday, the Vatican announced it was stripping Helmut Schueller, former vicar general of the Archdiocese of Vienna who has led the Pfarrer Initiative for some years now, of title “monsignor”. The Pharrer Initiative is a movement of Austrian priests that is asking for ecclesiastical reforms in areas such as obligatory celibacy and the administration of communion to divorcees and same-sex couples. Scheuller remains a priest to all effects and purposes but is not longer the “Chaplain of His Holiness”, an honorary title he received when he was president of Caritas Austria. ......... The news comes just days after Schueller’s interview with Austrian news agency APA, in which he announced an international meeting of movements that have sprung up across the world in recent years, either following in the footsteps of the Austrian rebel priests or presenting their own requests. The meeting is expected to take place in 2013 and groups of priests from Germany, Ireland, France, the U.S. and Australia who have links with the Pfarrer Initiative, have apparently already expressed their interest in attending. 2013, Schueller explained, is going to be “a year of internationalisation for the movement and a congress will probably be held in Germany.” A tenth of the entire Austrian clergy, that is, more than 500 priests and deacons, are members of the “rebel parish priest” movement. The Austrian initiative, which was launched in 2005, attracted worldwide interest in 2011 with the publication of its “Call to Disobedience”. In this manifesto, priests called for radical changes in the Church on issues such as the administration of communion to remarried divorcees, women’s ordination, ordination and married priests, giving more power to faithful and the local clergy to choose bishops. They also called for lay people to be given a more active role in the celebration of the liturgy, in preaching and in the Eucharist in cases where there is a shortage of priests. This would take some weight off the shoulders of priests, preventing them from becoming officials overloaded with work and making mass a bureaucratic affair; it would also prevent them from having to run up and down the country to administer the sacraments in different dioceses. Although Austrian bishops have always sought to keep the doors of dialogue with “rebel” priests open, in a recent speech he gave in the Vatican, the new Prefect of the Congregation for the Doctrine of the Faith, Mgr. Gerhard Ludwig Müeller, responded directly to one of the ideas carried forward by the Pfarrer Initiative: giving faithful the possibility to choose their own “pastor” is a “Protestant idea”, Müeller said.
Posted by Mike at 7:04 PM