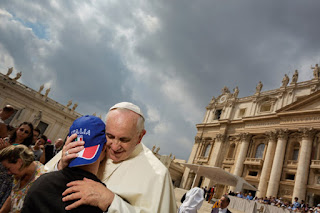 People rigidly bound to the law suffer pain, pride and often live a double life, Pope Francis said in a morning homily. God’s law was made not “to make us slaves but to make us free, to make us children” of God, he said in his homily during Mass at Domus Sanctae Marthae Oct. 24. The pope looked at the day’s Gospel reading from St. Luke (13:10-17) in which the leader of a synagogue is furious that Jesus heals a woman on the Sabbath. Jesus calls the religious leader a hypocrite because there is no problem releasing livestock from their ties for water on holy days, but it is considered wrong to release a woman from the chains of Satan. The pope said that in the Gospel Jesus often accuses those who rigidly adhere to the law as being hypocrites; they are not free children of God, but “are slaves of the law.” Behind this inflexibility, he said, “there is always something else. And that is why Jesus says, ‘Hypocrites!'” There is something “hidden” in that person’s life, “in many cases a double life, but there is also some kind of illness,” he said. Inflexibility is not a gift of God, he said. “Meekness, yes, benevolence, yes, forgiveness, yes, But rigidity, no.” Those who are rigid suffer when they realize they are not free, he said. “They do not know how to walk within the law of the Lord and they are not blessed.” “They seem good because they follow the law, but there is something underneath that doesn’t make them good - either they are hypocrites or they are sick.” Lurking just beneath the surface, he said, there is often pride - the pride of believing oneself to be righteous. “It’s not easy to walk within the law of the Lord without succumbing to rigidity,” he said. God’s grace is needed. Pope Francis ended his homily asking for prayers “for our brothers and sisters who believe that walking in the Lord’s law (entails) becoming rigid.” God prefers “mercy, tenderness, goodness, meekness and humility,” the pope said. May “he teach all of us to walk within the Lord’s law with these ways.”
Posted by Mike at 4:19 PM