Lutherans, Catholics should seek pardon for past persecutions, Pope says 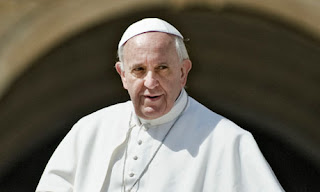 Pope Francis, in a visit to Rome's Lutheran church on Sunday, said both sides, Catholics and Lutherans, should seek forgiveness for past persecutions. "There were terrible times between us. Just think of the persecutions, among we who have the same baptism. Think of all the people who were burned alive," he said in improvised comments at the end of a joint prayer service. "We have to ask each other forgiveness for this, for the scandal of division," he said. The Lutheran Church was born of the rebellion by Martin Luther, who nailed his 95 theses criticising the Vatican to the door of a church in Wittenberg, Germany in 1517. Rome condemned Luther as a heretic because the Vatican feared his teaching undermined the doctrine of the Catholic Church and the authority of the pope. The Reformation that followed split the western Church and sparked wars between Protestants and Catholics, leaving divisions that live on five centuries later. Theological dialogue between Roman Catholic and Lutherans began in the late 1960s after the Second Vatican Council. But Catholics and Lutherans are still officially not allowed to take communion at each other's services. The pope took questions from the congregation, including one from a Lutheran woman married to an Italian man who told him of her pain in not being able to take communion together in each other's churches. Saying "life is bigger than explanations and interpretations," he suggested that individuals should not be obsessed with complex theological debate and decide according to their conscience. "It is a question that each person must answer for themselves," he said, suggesting that his own authority was below that of God's in such personal matters. "There is one baptism, one faith, one Lord, so talk to the Lord and move forward. I dare not, I cannot, say more," he said.
Posted by Mike at 12:28 PM