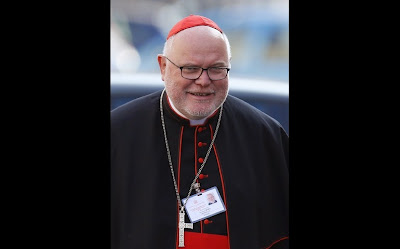 Addressing a key question raised by the Synod of Bishops on the family, a German cardinal said Friday that church doctrine can change over time. The church's doctrine, Cardinal Reinhard Marx said, "doesn't depend on the sprit of time but can develop over time." "Saying that the doctrine will never change is a restrictive view of things," Marx said at a Vatican press conference Friday. "The core of the Catholic church remains the Gospel, but have we discovered everything?" he asked. "This is what I doubt." Marx, the head of the German archdiocese of Munich and Freising, is one of some 190 prelates attending the Oct. 5-19 meeting. His remarks on doctrine carry special significance as the synod has raised expectations that the church might be changing some of its family pastoral practices, particularly regarding how it treats those who have divorced and remarried without first obtaining annulments. Marx spoke in German, with simultaneous translation into several languages provided by the Vatican. The synod is one of two called by Pope Francis for 2014 and 2015 on family life issues. It made global headlines on Monday when it released a working document summarizing its first week of discussions, known as a relatio post disceptationem, which called on the church to listen more and to apply mercy much more widely. This week, the prelates met in 10 working groups, divided by language, to discuss that document and to submit possible revisions. Those revisions were submitted Thursday morning and are to be used in drafting a final document for the synod for submission to Pope Francis by Sunday. Monday's document seemed to shift the tone of the church toward gay people, asking if the church was welcoming them and "guaranteeing them a space of fraternity in our community." Addressing that Friday, Marx said: "homosexuals are not condemned by the church for their sexual orientation." Making a difference between gay couples who have monogamous relationships for decades and gay persons who are promiscuous, Marx continued: "I cannot simply say that everything is black or everything is white." "We cannot say that since you are homosexual, you cannot experience the Gospel," Marx said. "This is impossible to me." Answering questions about possible changes in the church's teachings toward divorced and remarried people, Marx said the church first "needs to make a pastoral effort" to let such people who are divorced and remarried know that they are still part of the church. "Nobody is excluded [from the church]," he said. "Nobody is superfluous. Exclusion is not in the language of the church." "We cannot say since you are [this way] you have become a second-category Christian," Marx said. "This is not possible." "We cannot divide Christians into first class or second class or third class," he continued. All Christians, he said, are "parts of the body of Christ. We all participate." Marx spoke Friday at the briefing alongside French Archbishop Georges Pontier, president of the French bishops' conference, and Ilva Myriam Hoyos Castañeda, a Colombian lawyer who serves on her country's commission for Defense of the Rights of Childhood, Adolescence and the Family. Hoyos Castañeda, who is serving as an auditor at the synod, said she thought it was "important for women to be heard in this synod." Part of the way she sees her role, she said, is to give input as "a woman that works for the state, a woman that feels the difficulty of Catholics when they talk with the world." Responding to questions of how the synod members might be changing Monday's document in its new, final version, Marx said he hopes the final document will "bring everything to a common denominator in order to respect all views." "This is not the end of the synod process. We are in the middle of the path," he said, referring to the 2015 synod. Discussions among the prelates during the synod, Marx said, "have been rich and have had many directions." The debates even "have been really intense at times," he said. "What is clear is that we need to find common views." Pontier, the archbishop of Marseilles, said there had been two "poles" in the discussions and that the prelates were looking to ensure "balance is made between these two points of view." Approximately 190 prelates are at the synod and are able to vote in the discussions. Some 60 others, mainly non-prelates, have been selected in other roles and are able to contribute to discussions but not to vote. The Vatican made summaries of the suggested revisions to Monday's document made by the synod's small groups public Thursday, written in the group's various languages. The synod's final document is expected to be released to the public and to be used as the blueprint of sorts for the next synod, to be held in 2015.
Posted by Mike at 9:13 AM

Email ThisBlogThis!Share to TwitterShare to FacebookShare to Pinterest
Labels: divorce and remarriage, hierarchy and church life, role of women, Vatican